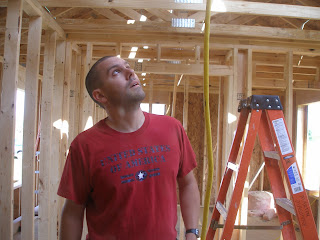 First, an update on the status of ROADHOUSE BLOG. For the past month, I have been busting my hump trying to build an addition to casa de Roadhouse for the next generation of right wing extremists I'm trying to raise. In short, 2 kids + one kid's room equals a problem that requires mucho denero to rectify, and little time or energy left to slay liberalism at the level of quality my readers would expect. As I near the end of this oh-so torturous home improvement adventure, I am hoping to be putting the hammer down and getting my humble blog back into the "big hole" (high gear) in the next few weeks.
As expected, hiring a contractor was part of the plan, and not something I was looking forward to. I found that the "word of mouth" method worked best. After all, a recommendation from a friend or family member carries more weight than an Internet listing by people I've never met. In the process, I found that there are two types of contractor, those who hire illegal immigrants, and those who don't. Those who do are easy to spot. They will be the ones who don't call you back after you tell them that the police will be called if there is even the slightest suspicion of their employee's immigration status being fraudulent.
Yes, "fraudulent". This brings us to my brief tutorial on immigration. For those of you who still don't get it, here is why it's wrong to be here illegally. First, you're trespassing. Second, you're a tax evader. Third, you're an identity thief. Fourth, you have not been screened for communicable diseases. Fifth, your criminal record has not been checked. Sixth, you have not agreed to take a loyalty oath, or learn our customs, laws, or language. Seventh, you're a drag on every single tax payer funded enterprise known to man. Eighth, you are spitting on every immigrant who has ever taken the time and made the sacrifices to come here legally. Ninth, you are an unfair advantage over every employer who has the decency to abide by the law by not hiring you. Tenth, until the unemployment rate is 0%, you are not actually needed.
You see, to not make a distinction between legal and IL-legal immigration is akin to seeing no distinction between buying a new Corvette and stealing one. This is not rocket science people. It's not racism either. If you are here illegally from Sweden, you are just as wrong as someone from Mexico, China, Pakistan, or jolly old England. Go home, go back to the end of the line where you belong, and come to our country the right way. Then, and only then, I will welcome you with open open arms, bearing a frosty cold Coors in one hand, and a hearty handshake in the other.
Posted by Roadhouse at 7:10 PM 9 comments: