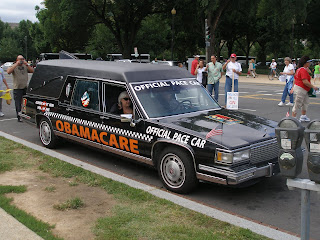 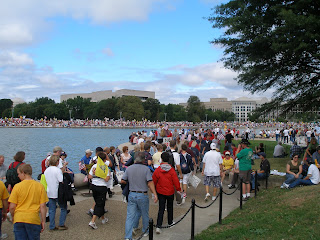 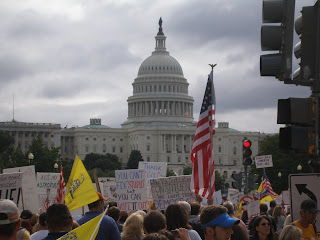 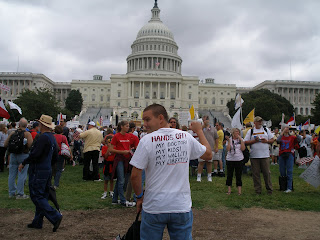 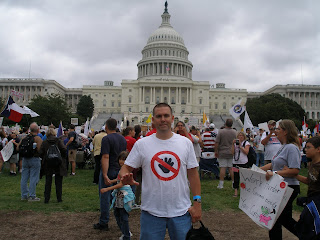 First let me say that I am very happy with the turn-out for the 9/12 march on our nation's capital. I have no idea how to gauge the size of the crowd, so I'm not going to try. You see, protests, rallies, and marches are really not my "cup of tea" usually. This is mainly due to the fact that unlike the liberal/slacker crowd that usually populates a typical protest, I happen to have a job. Rather than make unsubstantiated claims as to the size of the event (an old school lib tactic), I am simply going to say that there were more people there than I have ever personally witnessed at any one place in my entire life.
My "tea party" experience was definitely worth the time and money, for one reason. Hope. Irony of ironies is the fact that even though I am an eternal pessimist who on any given day has no faith what-so-ever in his fellow man, I actually came away with a sense that maybe all is not lost. As I scanned the seemingly endless "mob", the first thing I noticed was the diversity of the people attending (yet another irony). I saw both young and old, white and black, male and female, and according to their dress...every level of income. The second thing I noticed was that even though things went into overdrive and were relatively dis-organized as the bus dropped us off to join the march, the mild chaos of it all did not stop everyone from being polite and respectful.
As we marched, people went out of their way to say "thank you" to the police that were keeping watch. As opposed to the leftists that usually throw batteries at them and toss fire crackers under their horses. They thanked the veterans who were in attendance. They helped the older folks and handicapped negotiate some of the curbs and rough patches on the National Mall.
But the thing that stood out most was the total lack of arguments and/or heated discussion, let alone flying fists or use of hand cuffs.
Admittedly, I had no idea what to expect as the bus crossed the Potomac, but I was ready and willing to "throw down" with some ACORN scum if I had to. But throughout the whole day, I didn't even see one ACORN T-shirt.
I would also like to give a "shout out" to Al. Al was a guy who lives in DC and happened to be riding by on his bike. For some reason, of all the people there, he decided to stop and ask me about my home-made T-shirt slogan and the general purpose behind the gathering. Though he admitted being a supporter of Obama's health care proposals, he was extremely polite and engaging to a fault. With no detectable sarcasm of condescension, he asked lots of questions and offered reasonable and well though-out counterpoints to many of my ideas and comments. As we debated the pros and cons of our differing political perspectives, I had hardly even noticed that we had been standing in the middle of the Mall for nearly two hours debating the issues.
Though I doubt that neither Al nor I managed to change each other's minds on the issues, I left the discussion refreshed to know that there are still people out there who can dis-agree with you and still be both respectable and a good conversationalist.
I am still offended that our government has put us in such a position that we feel we need to give them a piece of our mind in person, when we should be home playing with our kids, but all and all, this trip gave me a little bit of hope for our future. Not pointless political slogan "hope", but good old fashioned "reason to get out of bed hope".