THE CASE FOR PARTISANSHIP


If we (at least some of us) have learned nothing in the past few years, it should be that reaching across the isle is an exercise in futility. Call it "bi-partisanship", the "new tone", or just plain old civility, when you set out to make a compromise for the sake of "getting something done" you will always come up on the short end of the stick.

First, let's look at the word compromise. From our first years on this planet, we are taught that compromising is a good way to settle a dispute and work out differences. I disagree.

The guy who was actually right in the beginning has acquiesced, and is now obligated to throw his compromise share of gasoline on the now raging inferno. The end result is the death of both firemen and an out of control fire that is now left to others to put out.

Had the party who knew he was right stood his ground, both firefighters would still be alive today. Unfortunately, he decided to engage in a "new tone", and by default he compromised his principals and everything he ever leaned about fighting fires. And for what?

He lived in a world where being wrong was no longer something to be embarrassed about. Media outlets commonly gave as much air time to those who were clueless as they did with with those who used common sense. There was no longer shame attached to being wrong. In fact, people were taught at an early age that every one is an equal and criticism is actually "hate speech". So now, even though he was right, it was acceptable in some circles to throw gas on a fire. So the other guy was considered to be equally qualified to make decisions and never questioned, nuch less ridiculed for being an idiot. When he spoke out, he was pressured to give in for the sake of getting something done.

Too bad for us that this mentality has infected our allegedly representative democracy. Our elected officials are more worried about being called a "zealot" or a "partisan" than they are about what actually happens to our country. Standing up for the principals that have a time tested track record of success and prosperity is no longer an option. If it doesn't bring high numbers in a focus group or opinion pole, it doesn't see the light of day.

Why do we do this? Do we ever get anything for our attempts to "reach across the isle"? No. Unless you count a bloody stump. Democrats learned this lesson decades ago, but we continue to insist on taking a punch and asking for another. In an age where it is getting harder and harder to tell a Republican from a Democrat, I can't help but wonder why we even have a party anymore.

Until we are willing to stand up for what we know is right and start dropping some ideological nukes on the liberal establishment, we are going to continue to lose elections and probably the nation as a whole. I'm looking at you John McCain!
Posted by Roadhouse at 4:49 PM 6 comments: 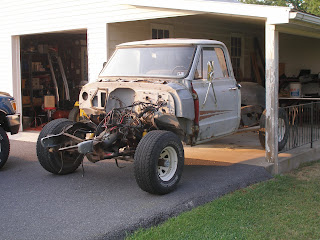 WHAT TO DO WITH MY OLD CHEVY?

Earlier this year I purchased a 72' Chevy pickup that I was hoping to restore. Some of you may recall a previous article I had written about it (GEARHEAD ZEN May 30th). Since then, many things have changed in this country. Not the least of which is the role of our government.
If you take the time to look at our founding documents, you will find many things. You will find a guarantee of your right to live, defend yourself, speak, etc, etc. You will find the limitations of government spelled out in pretty plain terms. You will also find the role that government is supposed to have in our lives written in the plainest of English. What you won't find is document, amendment, or enumerated power that designates our government any right to own, or control a car company. In fact, you will find no shortage of documentation that specifically prevents such things from happening. Despite these facts, the United States government is getting ready to jump head first into the automobile manufacturing business...at our expense of course.
As I made my deliveries last week, I listened to the auto manufacturers make the convoluted cases to Congress for a massive bailout via tax payer dollars. As I listened, I couldn't get past the fact that neither side had one word to say about the actual responsibility of our government. A real Congressman would have stood up and reminded everyone that the government has no legitimate right to get involved in private business matters such as this. He should have suggested that the only thing the government can do to help the car industry is lower taxes and stop trying to tell them what kind of cars they should be making, especially for such a bogus reason as global warming. Any self respecting Congressman would have given the third degree to union reps that were present to give their two cents. After all, it is unions that have caused most of this mess in the first place by making it so expensive to produce an automobile. In fact, this hearing should have never happened in the first place. But it did.

So now I am left with the question of what to do with my old Chevy. My family has owned Chevy's for years and never had a reason to complain. Today, I am embarrassed to have a GM product on my property. The nerve of that company expecting me and my fellow citizens to bail them out because they don't have the cajones to stand up to the unions is just more than I am willing to swallow right now. Will they recognize my contribution to their plight via taxation and send me a crate full of parts for my truck in thanks? No. Will they even send me a Goodwrench gift certificate? No. I/we get to pay for the handiwork of a bunch of UAW babies without so much as a new hood ornament in return.
The long and short of it is, I now get to feel guilty for purchasing more of their parts and eventually driving around in one of their products, or I get to take a bath on what I paid for the truck in the first place in addition to the time I've already invested in it.
All I know is, my other daily drivers (a Hyundai and Toyota) give me successful trips, not guilt trips.
Posted by Roadhouse at 7:35 PM 5 comments: 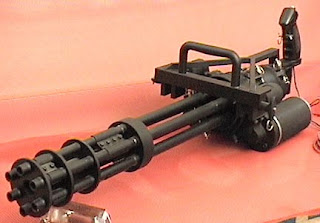 ROADHOUSE SOLVES THE PIRATE PROBLEM
Ok, really. Do I have to do everything around here? Is the new wave of modern piracy at sea such a brain teaser of an issue that we actually can't figure out how to stop it? How embarrassing.
This is not rocket science people! Equip ships with one of these, and train the crew to use it. After the first two or three shredded pirates are reported in the media, the concept will look much less appealing to up-and-coming "Jack Sparrows" out there. Problem solved. NEXT!!!
One note of caution. Make sure no one on your ship's crew is named Plaxico.
Posted by Roadhouse at 7:56 PM 4 comments:

BROTHER CAN YOU SPARE A GLOCK?

From my "personal anecdote" file: A few weeks ago, I decided that it was time to update my supply of personal firearms. Not because I felt a sudden need to frivolously spend money in the midst of a struggling economy, but because I believe my time to do so is running short. Having seen President-elect Obama's voting record regarding gun ownership, I predict that our Second Amendment right to defend ourselves, our property, and our loved ones will soon be placed firmly on his chopping block, just prior to it's untimely death. If I'm wrong, then I've just spent a pile'O money that wasn't in the budget this month for no reason. If I'm right, then I can tell my grandchildren how I was one of the last people in America to exercise their right to defend themselves. Either way...THANKS A PANTLOAD BARRY!

In my impromptu search for the right guns, I had a few criteria in mind. I knew that I would need to buy a gun that my wife could operate under pressure in the event that we had an "uninvited guest". We both learned this the day that she tried to shoot my .45 semi-auto. You see, like many women, she lacks the upper body strength to rack back a larger caliber firearm, which is a major safety factor. Though she can easily shoot my .22, it lacks the power to knock down an intruder effectively, especially if he's high on meth or something.
I knew I would want something that would have sufficient "knockdown" ability, ease of operation, and yet look intimidating enough to hopefully scare away, or scare into compliance anyone who would break into our home when I'm not there. Of course the predominant factor is the family budget.
Considering these options, I went shopping. To my surprise, I ran into an obstacle immediately...parking. My first stop was a national chain sporting goods store that has served our area for nearly ten years. That day, I could barely find a place to park ye' old SUV. To my surprise, there was no clearance sale or special event planned there for that day. No. As I made my way back the gun department, I was met by a sea of men who apparently read the same tea leaves that I did. Ever the class clown, as I made my way through the crowd, I said loudly "Is this where the Barak Obama fan club meeting is being held?" After the sarcastic laughter died down, I went on looking for the perfect gun for my wife and a new shot gun for myself. This was an exercise in futility because the crowd was so big and the unprepared staff was so few that I knew I would be waiting for at least an hour to even talk to someone behind the counter. Actually buying a gun was that day would be out of the question.
Over the next few days, I searched other stores and scoured the Internet, looking for the models I wanted. Keep in mind, I was not looking for an exotic hard to find firearm. I was looking for two of the most common guns known to man, a shot gun and a small tactical semi-automatic rifle. Everywhere I looked the same three words kept slapping me in the face...out-of-stock.
Eventually, after nearly giving up, I tracked down the guns I was looking for and was even able to get them at a reasonable price. This was no small task either because the price of firearms is going up as the demand for them rises. Like a kid at a candy scramble, I feel I was lucky to get the "candy" I was looking for. If I had been a little slower, I'm sure I would probably have been stuck with the firearm equivalent of those peanuts that are always left on the ground after the children have finished the pillaging of candy thrown from their sadistic parents.
Will my family actually be safe from the criminal element, now that they have an edge against it? I hope we never have to find out.
Posted by Roadhouse at 7:34 PM 3 comments: