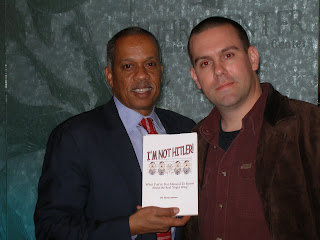 In support of Juan Williams, I have decided to re-run an article I wrote in February of 2009. I sure hope NPR and George Soros think they've got their money's worth by firing Williams. Rather, I do believe they've just thrown NPR's "thought police" agenda head-long into the national spotlight for everyone to see.
I guess Teri Gross can officially call her show All Liberal Things Considered.

No, this is not a "photo-shopped" picture designed to shamelessly plug my book. It actually is me with the Juan Williams of FOX News and NPR. Mr. Williams was lecturing at Shippensburg State College, which is mear minutes from the Roadhouse homestead. As a long time fan of Williams, I couldn't justify missing an opportunity to meet him. As a conservative, I often disagree with Juan's assessment of issues facing our nation, but what sets Williams apart from the liberal herd is not his opinions, it's his personality.
Since I first took the red pill and was drawn into the "Matrix" that is the world of politics, I've seen many political pundits hock their wares across my television screen. Among the liberal media are platoons of snarky, elitist "intellectuals" who never miss a chance to bash conservatives with little more than school yard shin-kickery. Through it all, one guy has stood out to a point where I frequently ask my wife, "Why can't the rest of those jerks be more like him?" That guy is Juan Williams.
The topic of his speech was "Eyes on the Prize: The Truths of American Race Relations". Admittedly, I was expecting Mr. Williams to be a bit more partisan, given the college setting and no cameras rolling. I actually told my traveling companion (AKA, my father-in-law) that we would probably be doing a lot of eye rolling during his lecture. I was wrong.
Like true statesmen of a time pre-dating focus groups and Neilson ratings, Williams spoke of racism in terms that were both fair and accurate. He spoke of personal responsibility or lack there of in the black community. He spoke of Dr. King's message and how he might relate to society today if he were still alive to witness things like gangsta' rap or modern day poverty. He reminded us that even though there is more work to be done, people in general have come much further in their attitudes towards racism than they are usually given credit for. He advocated more communication between ethnicities, and how important it is to keep the conversation going.
Amazingly, he did this without blaming George Bush for all the ills facing the black community, and without throwing verbal pitchforks at those of us on the "right". Unlike just about every liberal talking head I have ever heard, Williams managed to speak for an hour, and take questions from a predominantly "left" audience without making me want to throw produce at him. In fact, I really can't think of one thing he said that I disagreed with. Spooky huh?
After his speech, he did a book signing. He was every bit the respectable American in person that he is on the TV. I told him that I don't always agree with him, but I consider him to be a true statesman. I gave him a copy of my book and he was even gracious enough to let me get a picture of him holding it...his idea.
Juan Williams...a class act, and proof that being a liberal doesn't mean you have to be a nut-job.
Posted by Roadhouse at 7:10 PM 2 comments:

THE FAT LADY DIDN'T SING YET!

Maybe it's my repeated exposure to the lessons of Aesop's Fables which I've been reading to my kids for the past six years. Maybe it's my eternal "glass half empty and leaking rapidly while teetering on the edge of the table" way of looking at life. But in any case, I must tell you that I refuse to adopt the current general consensus that the Democrats are going to go down in flames via a Republican tsunami in this year's mid-term election.
Fore-gone conclusions may be fun to consider, especially when there seems to be so much circumstantial evidence to support them. Polls might be a blast to track and calculate. But I would caution everyone hoping to end the current nightmare to remember a few things.
Only two short years ago, this very same country elected a man with no verifiable experience, connections to enough radical, anti-American communists to start a baseball league and a legislative resume more hazy than my recollections of my 21st birthday (thanks alot Coors brewing company).

It's not that I'm trying to pee in our own Cheerios, I just want us to remember who we're up against. Team Obama is a conglomeration of bullies, radicals and well connected union leg breakers. To them, cheating, lying, distracting, and winning "by any means necessary" is part of the job description. My point is that it is way to early for anyone to be breaking out bottles of champaign and making assumptions of any kind (I'm looking at you Dick Morris).
Let's wait until that fateful Tuesday night to decide if we should be toasting our victories or drowning our sorrows. In the meantime, we need to fight this political battle as if our very life depends on it...because it does.
Posted by Roadhouse at 6:25 PM 2 comments: