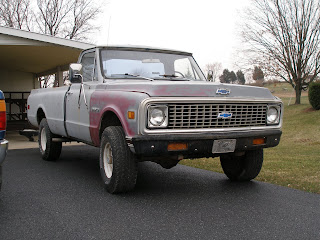 Sometimes I find that my inspiration for the things I write come from very unlikely sources. One example of this is a 1972 Chevy Pick-up that I purchased in hopes of fixing up and making a profit. I used to do this quite often when I was younger, as I had more free time then. Now that I am married with child (and one on the way), I feel added pressure to finish this project ASAP. Yesterday, I was tearing the front end of this truck apart when my mind started to wander a bit. I was thinking back to all of the vehicles I had rebuilt for profit in my younger years when it dawned on me. I was a conservative much earlier in life than I realized.
You see, even though I had many liberal leanings at one point in my life, my actions were decidedly "right wing". I was not content to sit and complain about not having extra spending cash. I did something about it. I don't recall wasting valuable oxygen blaming others for my lot in life, I made attempts to remedy my situation. I didn't come running to the government for hand-outs. I made do with what I had.
As I layed waste to rusty fenders and rotted wiring harnesses, I realized that teenagers today would rarely be caught dead with a wrench in their hand. Much less out of a desire to put some extra change in their pockets. Rather, many would just as soon demand a few bucks from Ma and Pa. Consequently, this lack of ambition also prevents a lot of kids from having any technical ability, leaving them at the mercy of technicians and repairmen, while costing them more money as well. Not to mention being unable to play the hero when a young lady's car won't start.
Rugged individualism, work ethic, and independence were more than just rare words not too long ago. I refer to that period as "the good ol' days". So as I torque the bolts and set the timing, I am also trying to set an example for my daughter and teenage nephews. I hope to pass on lessons I learned along time ago, before I even knew they were lessons.
Lessons like: If you can't find a job, make your own. If you want something, work for it, earn it. Have something to show for your work that will exist after you're gone. Let your work be your legacy. Let your work be your portfolio. Let your work be your example. But most of all, work hard, save your money and take satisfaction in having earned it yourself.
Posted by Roadhouse at 6:54 PM 1 comment: