GREAT BALLS OF FIRE...or not.

In the weeks following the dueling controversies of the Ground Zero Mosque and the burning of Korans by some "weak on follow-through" preacher from down south, much has been said about Americans being "Islam-o-phobic". My old school Webster's dictionary defines phobia as "a persistent illogical fear". Being acrophobic myself, I can relate to a having a fear that could be considered "illogical"...except for the whole "plummeting to a horribly violent death, resulting in your guts being splattered about the ground like a busted water balloon" thing. Other than that, a fear of heights is pretty irrational. But what about Islam-o-phobia?

Obviously, as Americans we are simply over-reacting in our skepticism toward the agenda of the Muslim community. Be that as it may, I have decided that logical or not, I am Islam-o-phobic.

I break it down this way. When a person of any-or-no faith at all depicts Jesus or the Bible in an unflattering way (see Comedy Central), the most they have to fear from a Christian is a good ol' fashioned forgiving, and maybe a prayer or two. Yet when someone says (or draws) something showing Allah or the Koran in a negative light, it's time to strap on the bomb vests or break out the beheading swords. And another thing. Has anyone noticed that there seems to be no Hindu-phobia, Bhuddah-phobia, or even Satan Worship-0-phobia in the world? I wonder why that is? Oh, that's right, those guys don't see blowing up schools as a way to please thier various diaties. 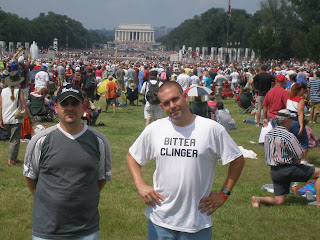 Leave it to me to have an entirely different take on the 8/28
"Restoring Honor" rally that I and a co-worker attended last week. As expected, I was impressed with the turn-out, and the general attitudes of everyone I saw there. I found no fault with any of the speakers, their message, or even the accommodations for such a mass of people. But as I and my former Marine, fellow truck driving traveling companion walked through the crowd, one thing stood out as a constant, nagging, negative observation...THIS PLACE WAS A DUMP!

Some of you may remember my article chronicling my trip to Washington DC for the 9/12 Tea Party rally last fall. At that particular event, my excursion was limited to the northernmost end of the National Mall. While I was there, I had spent most of my time in the middle of the mall talking to people, as opposed to critiquing the mall itself. This latest trip was different.
At it's southernmost point, the National Mall is a mix of wooded areas, ponds, monuments, and small rolling hills, with any number of bushes and shrubs throughout. Sounds pleasant and picturesque, right? Not so much.
You see, I forgot to mention the many areas that I would best describe as some sort of cess pool/swamp-like spring situation, and the countless ankle-breaking, basketball-size holes that dotted the grounds. Then there was the Reflecting Pool.
Being a naive American, I assumed that the Reflecting Pool and surrounding ponds were filled with water. WRONG! Apparently, these features are being used as temporary holding sites for an un-identifiable liquid, best described as something that might be leaking from Monty Burns' nuclear power plant, and kept secret with the help of "Fat Tony" and Mayor Quimby (Simpsons fans know what I mean).
I can also assume that no part of the trillions of dollars in current Federal spending has been allotted for the purchase of weed eaters. I mean really. The National Mall is visited annually by hundreds of thousands of people from around the globe. It is supposed to be inspirational and project an aura of both power and elegance. Between you and me though, the landscaping at my house makes the National Mall's look like a pile of puke.

To be fair, until 9/12/09, I hadn't been to Washington DC since Reagan was in office, so I am not blaming Obama for this one. For all I know, the Mall might have been looking this way for the past twenty years. Still, that's no excuse to have the beacon of freedom for the entire world looking (and smelling) like a truck stop bath room.