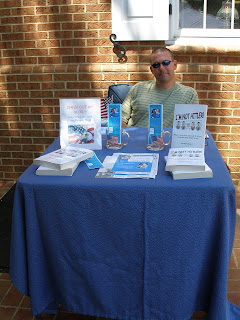 One of the pitfalls of being an unknown writer is the great lengths you go to in order to get your name out there. On a limited income, you have to be creative as opposed to simply hiring a publicist. You also have to be willing to put yourself in situations that would normally make you pray for food poisoning. One example of this is my home town's annual "sidewalk sale days" weekend. It's pretty much what it sounds like. The local businesses, churches, and charities hock their wares out on the sidewalk in hopes of capitalizing on the "festival atmosphere". For an anti-socialite like myself, attending, much-less participating in this function is a lot like something you might do when you lose a bet. But when my marketing director (my wife) tells me to do something, I've found that it's easier to obey.

The day started as I expected. Setting up my card table and arranging my books and displays became the precursor to setting in the sun and watching the huddled masses walk by all day. The day was un-eventful with the exception of a guy who mistook my book for a pro-Hitler rant. After he invited me to join his new chapter of the Aryan Nation, I had to explain to him that I was the polar opposite of a racist. He went on his merry way and I went back to trying not to die of boredom. Until Alma stopped by.

Alma could best be described as the classic American sweet old lady. She could easily have been selected to appear in any AARP, or Medic Alert add campaign. She stopped by to see what I was selling and began to ask me about my book. Then she made the mistake of asking me who I was going to vote for in November. It was all down hill from there.
Being an Obamma fan, she was slightly offended when I told her that he was wrong on every issue. The random issue I used as an example was global warming. Apparently, I should have picked any other issue because this one really hit a nerve, and I was not there to upset elderly women. Soon, I was debating a sweet old lady about global warming in the "public square"...literally.

Her main point was the idea that if there is even the tiniest, most minuscule chance that there might be a hint of environmental danger facing our planet, then we have a duty to throw logic and reason out the window and implement policies that even my four year old daughter would see as bad ideas. Or something like that.
I countered by asking her why the first ice age melted when man had not yet industrialized. She countered by telling me that that had nothing to do with anything and that I needed to learn more about global warming before I formed my opinion. It was at that point that I could tell that she had bought into the Al Gore hysteria hook line and sinker. She was so passionate about saving the world for the next generation, that my many counter-points were falling on deaf ears. I pictured Al Gore laughing while sitting on a pile of money that he swindled from elderly folks by scaring them into opening their coin purses, just as any other con artist would do.

Luckily, Alma's husband came by to retrieve her. I shook her hand and invited her to contact me if she ever wanted to continue the conversation. I magnanimously offered my personal E-mail address and we parted smiling.
That one experience reminded me that liberals are not always people that are filled with hate and disgust for their country. Sometimes they are just regular people who have been swindled and taken advantage of. I will always believe that liberalism is a mental disorder, but I also know that it can be nothing more than a simple con job as well.
Posted by Roadhouse at 6:38 PM 4 comments: